Since the 1870s, scientists and paleontologists have been digging into the prehistoric past in Wyoming and Utah. This area of the United States is known to be a hotbed for well-preserved fossils. These are a few of the best places in Wyoming and Utah where you can see incredible fossils and learn about ancient history.

Located in southwestern Wyoming, Fossil Basin is home to some of the best-preserved fossils in the world. This area includes part of the Green River Formation, which is within the Eocene era. That means the fossils found in this formation are approximately 50 million years old.

A variety of different species of fossils have been discovered in Fossil Basin including fish, mammals, reptiles, plants, and birds. The most common fossil found in the area is the Knightia fish fossil, which is Wyoming’s state fossil.

Known as the Fossil Fish Capital of the World, Fossil Basin is one of the best places to experience the thrill of fossil fishing. Book a fossil dig excursion at one of the dig-your-own quarries in the area and get ready for an adventure! There’s something addicting about splitting limestone layers in anticipation of revealing something incredible! 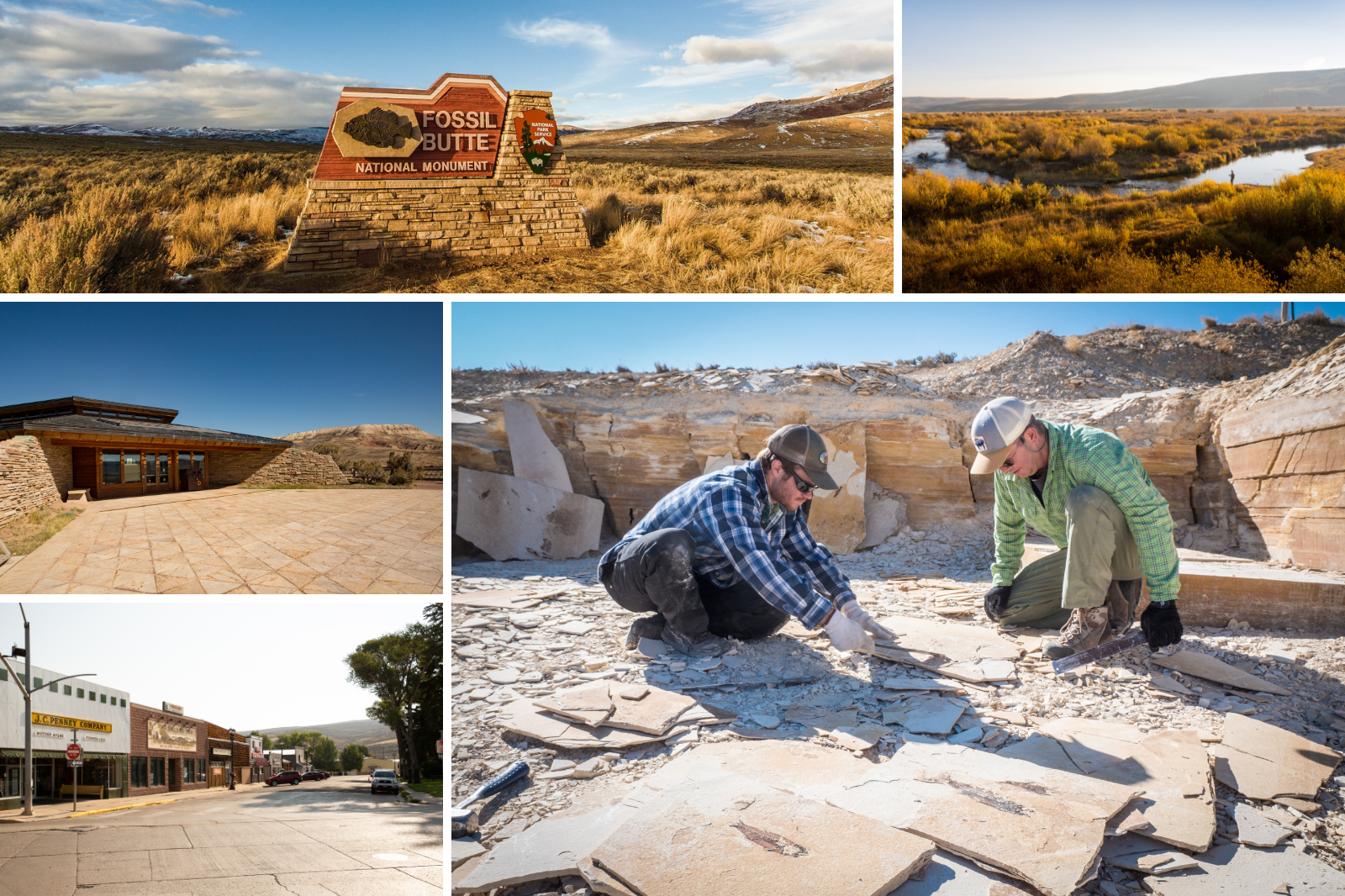 The drive from the Kemmerer-Diamondville area to Jensen, UT is stunning. Much of the trip involves driving along the Flaming Gorge Scenic Byway, which has many places worthy of a stop. One of those places is the Flaming Gorge Dam Visitor Center, where you can enjoy scenic views and learn more about the dam and surrounding area. Just down the road from Flaming Gorge you’ll find Red Fleet State Park. At this Utah state park, you can hike along Dinosaur Track Site Trail and see 200-million-year-old dinosaur tracks!

As the name indicates, Dinosaurland is known for its dinosaur fossils. The Late Jurassic era (148-155 million years old) Morrison Formation that runs through this area of northeastern Utah is one of the most significant sources for dinosaur fossils in North America.

Many petroglyphs are also preserved in stone at Dinosaur National Monument. There are multiple petroglyph and pictograph sites where visitors can see a variety of Fremont culture designs.

In addition to being a paleontology paradise, Dinosaur National Monument has stunning scenery. Its location along the Green River makes for dramatic vistas. Looking for a hike with breathtaking views? Try Harpers Corner Trail.

Another great place to see fossils and learn about this area’s fossil discoveries is the Utah Field House of Natural History. The museum has a variety of interactive displays and exhibits, making it enjoyable for kids and adults alike. Don’t miss the dinosaur garden outside of the museum for a fun photo op! 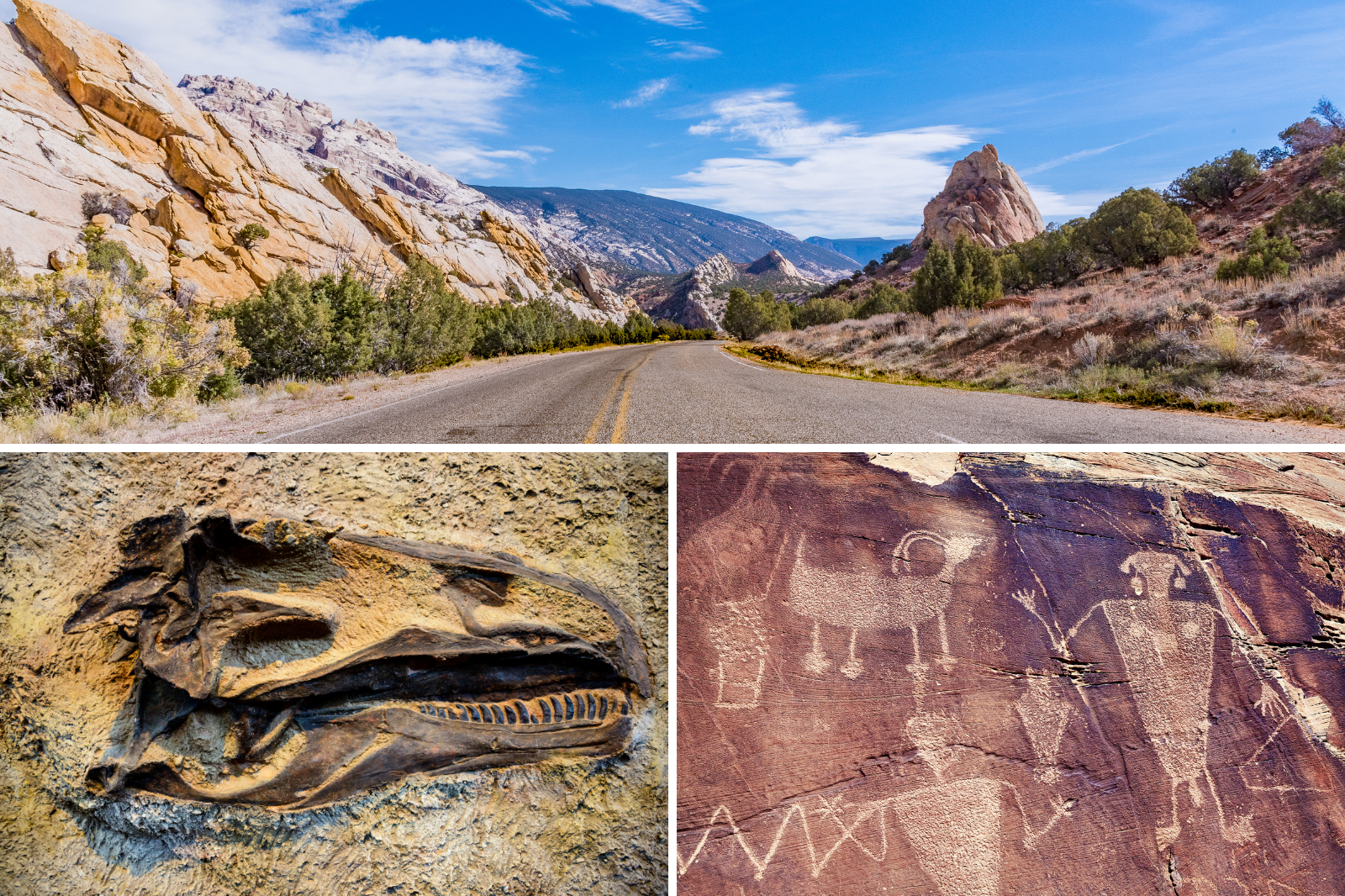 As you make your way back north and head into Wyoming, you’ll pass through Rock Springs, WY, where the Western Wyoming Community College Natural History Museum is located. At this museum, you’ll see displays of many specimens found in southwestern Wyoming and other places. Just before you arrive in Thermopolis, WY you’ll pass through Wind River Canyon, a geologic wonder along the Wind River Canyon Scenic Byway.

Thermopolis is a small town with a fascinating history. Part of that history goes all the way back to the Jurassic period. Today, you can see remnants of the area’s prehistoric past, which includes the Morrison Formation and the Sundance Formation.

Wyoming Dinosaur Center is home to many fossils and specimens that have been discovered in the area and in other parts of the world. Over 50 mounted skeletons of dinosaurs and other prehistoric creatures are on display at the museum along with thousands of other fossils and specimens. With the museum’s Dig For a Day program, folks can help excavate dinosaur bones and search for fossils!

If you love fossils, you may also be interested in Ava’s Silver & Rock Shop. The owners of the shop can share a wealth of knowledge about the area’s geology, and they sell a variety of rocks, fossils, and jewelry.

Archaeology enthusiasts won’t want to miss Legend Rock Petroglyph Site, located about 20 miles west of Thermopolis. This site has hundreds of petroglyphs, some of which may be nearly 10,000 years old! 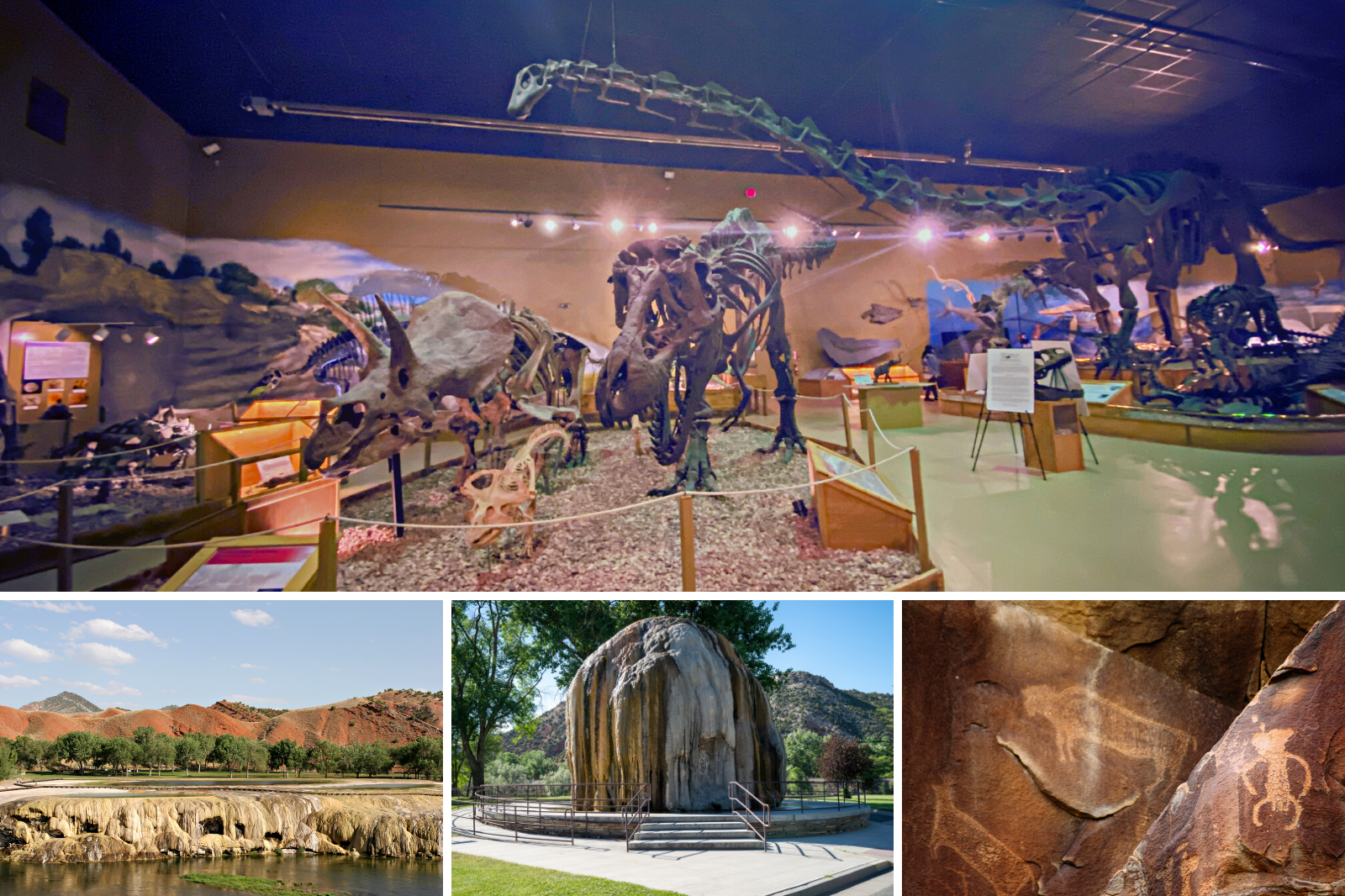 As you travel north on US-20/WY-789 from Thermopolis to Greybull, WY, you’ll pass through Worland, WY, where you can visit the Washakie Museum & Cultural Center. This museum features paleontology and archaeology galleries as well as exhibits about the settlement of the Bighorn Basin.

Another site in the area that has fascinated scientists and visitors since the late 1990s is the Red Gulch Dinosaur Tracksite. The tracks were first reported in 1997. So far, about 1,000 dinosaur tracks have been found at the tracksite, and it’s thought that there could be thousands more. It’s the largest dinosaur tracksite in Wyoming, and one of only a few in the world from the Middle Jurassic period. 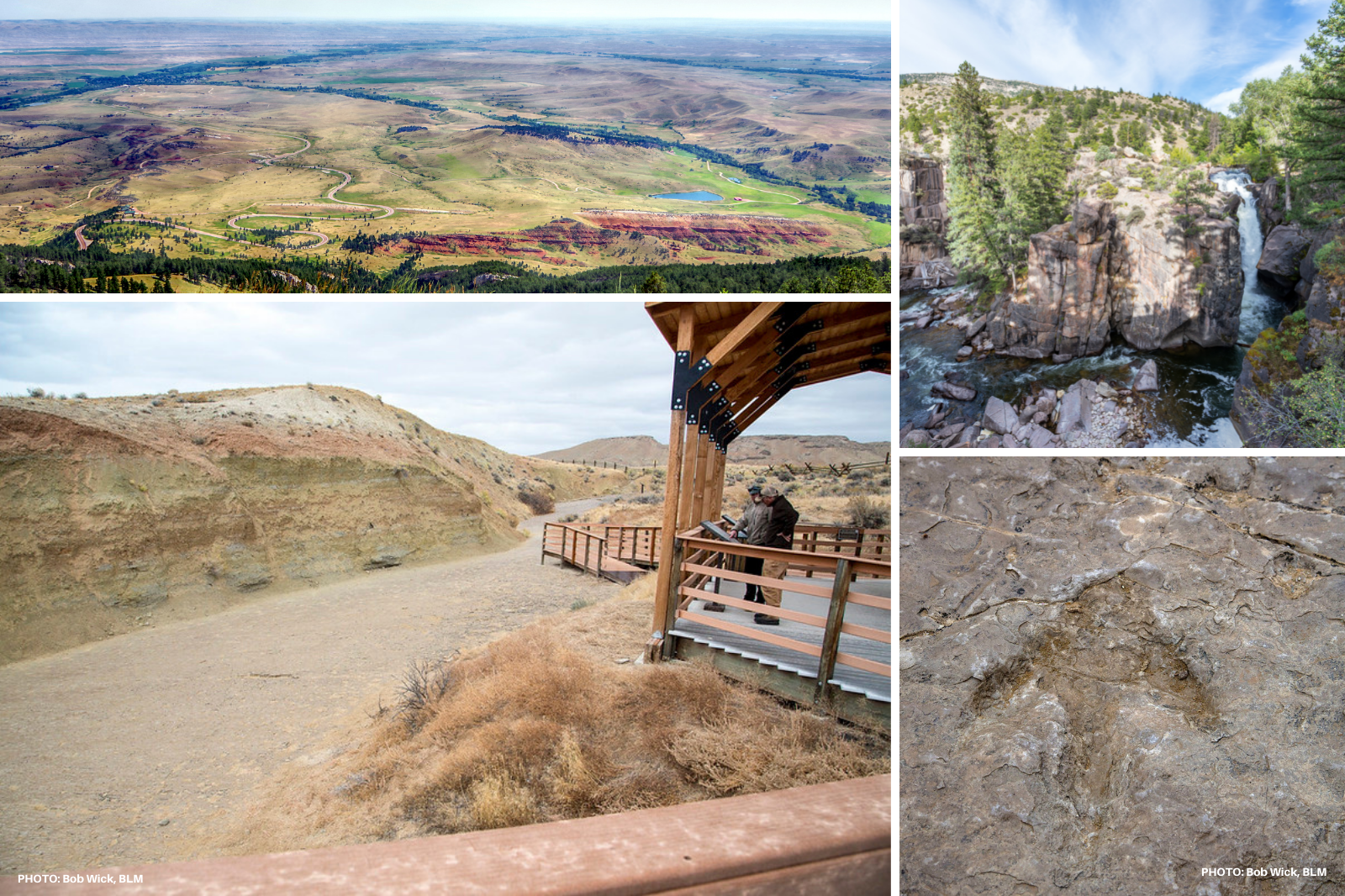 Please remember to take care and travel responsibly when you visit these incredible places.

Have a couple extra days and want to visit Wyoming’s national parks?
Take a look at this itinerary for the national parks and Fossil Basin.