You don’t know how addicting fossil hunting is until you try it for yourself. “Oh it’s kind of like looking for gold, I guess,” said Mike Snively from Ulrich’s Fossil Gallery. “Fossil digging is something everybody should try at least once.” That’s what he did—tried it once, as a summer  job in high school at Ulrich’s. That was in the late 1980’s. Snively has been there ever since. “Fossil digging got in my blood and I fell in love with it.”

Ulrich’s Fossil Gallery is one of the first and largest purveyors of professionally prepared Eocene fossil fish from the Green River formation. Fossil removal, preparation, and preservation started out as a hobby for Carl and Shirley Ulrich in 1947. By 1980, it turned into a full-time job for them when Carl quit his day-job in the oil and gas industry. Snively, who grew up 50 miles north of Kemmerer and believes that he’s been a rockhound for most of his life, worked alongside Carl Ulrich for 30 years. He learned from the best in the business right up until Carl passed away in 2018. Shirley is 94 years old and still owns the operation, while Snively runs it. 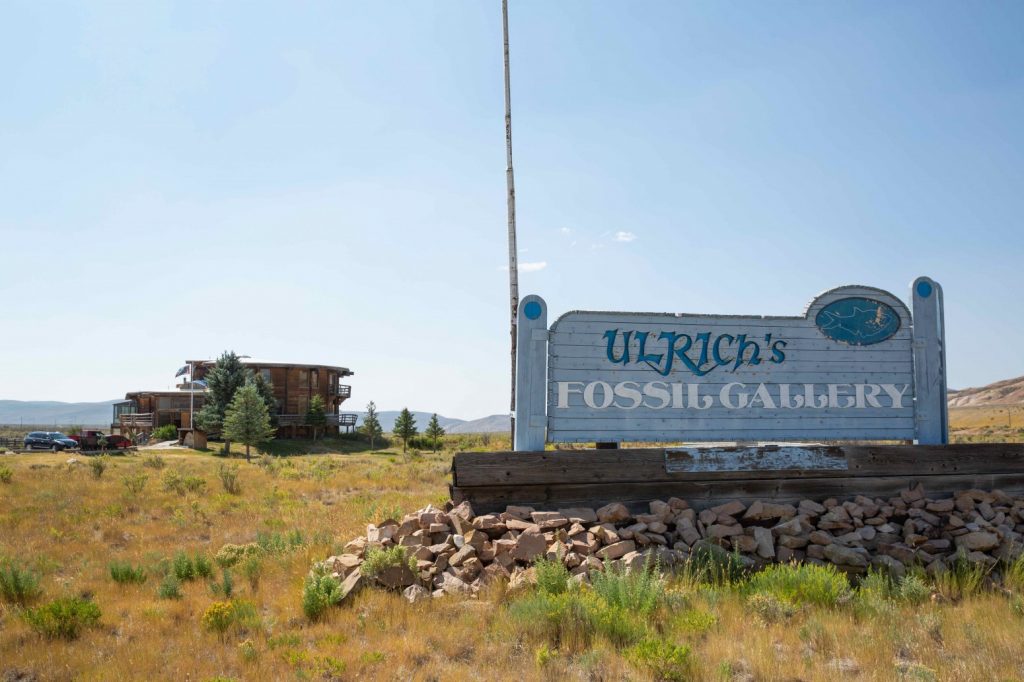 The Quarry and The Digging

The quarry is where all the magic happens. Ulrich’s quarry happens to be just a short 10-minute drive from their gallery. After driving up a dirt road to the top of a hill overlooking Fossil Butte National Monument, you’ll see short cliff bands of bright, white and tan rock. Lake sediments were lithified into layers of rocks classified as the Fossil Butte Member of the Green River Formation. “Most of the Fossil Butte Member consists of lacustrine limestone interbedded with numerous thin layers of organic-rich shale; thin beds of oil shale occur both above and below the most fossil-rich layers,” according to the Wyoming State Geological Survey. This is where the fossils are found!

Your guide will teach you how to break layers off of the rock bands and continue to split them down until you find a fossil. If there are no fossils after arriving at the single, thin layer, you’ll move on and break off another layer to search through. What makes fossil diggings so addicting is similar to what makes fishing in a river so addicting—it’s repetitive and takes patience, but once you get your first fish, you just want more. You want more fish and you want bigger fish.

After being asked about the most unique fossils ever found at the Ulrich’s quarry, Snively said, “I get that question all the time, but there’s been so many it’s really hard to say.” Some notable fossils he named off the top of his head were bats, freshwater stingrays, huge entire palm fronds, fish-eating fish, big turtles, and even a 6-foot gar fish! 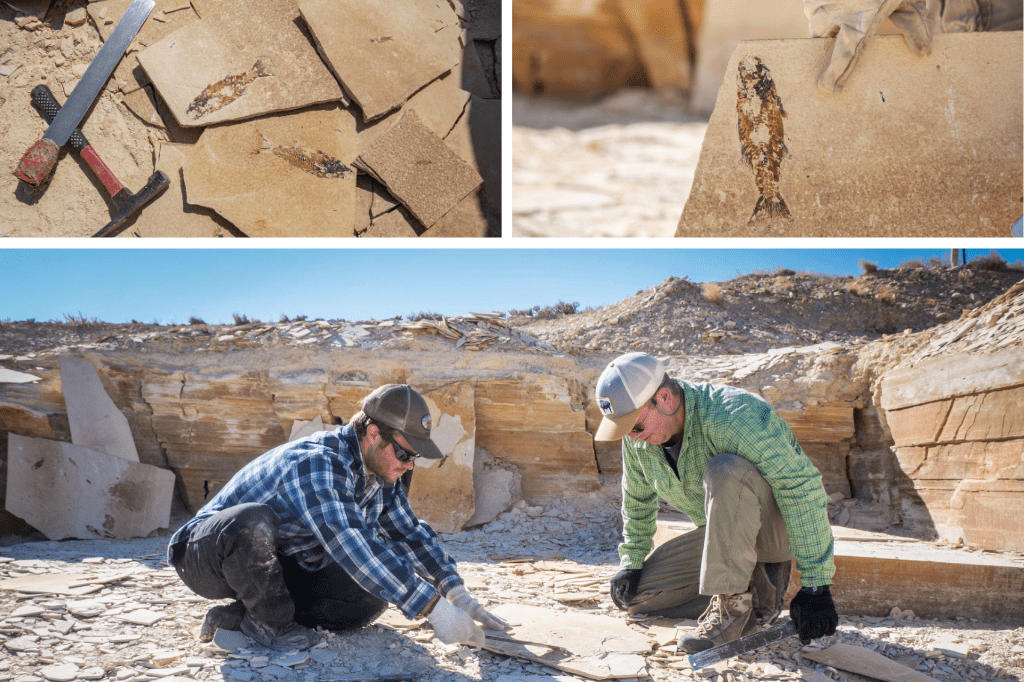 Ulrich’s Gallery is a culmination of incredible finds made by Carl Ulrich and his protégé over the last eight decades. Many have been sold to private owners or even museums like the Smithsonian Museum of Natural History, but there are still many to admire at the gallery. After World War II, President Eisenhower presented one of Ulrich’s prepared specimens to the emperor of Japan, as a gift from the United States Government to the people of Japan. Whether you’re looking for a souvenir, a gift for someone, or a large work of paleontological art, the gallery is worth a stop on your way into Fossil Butte National Monument. 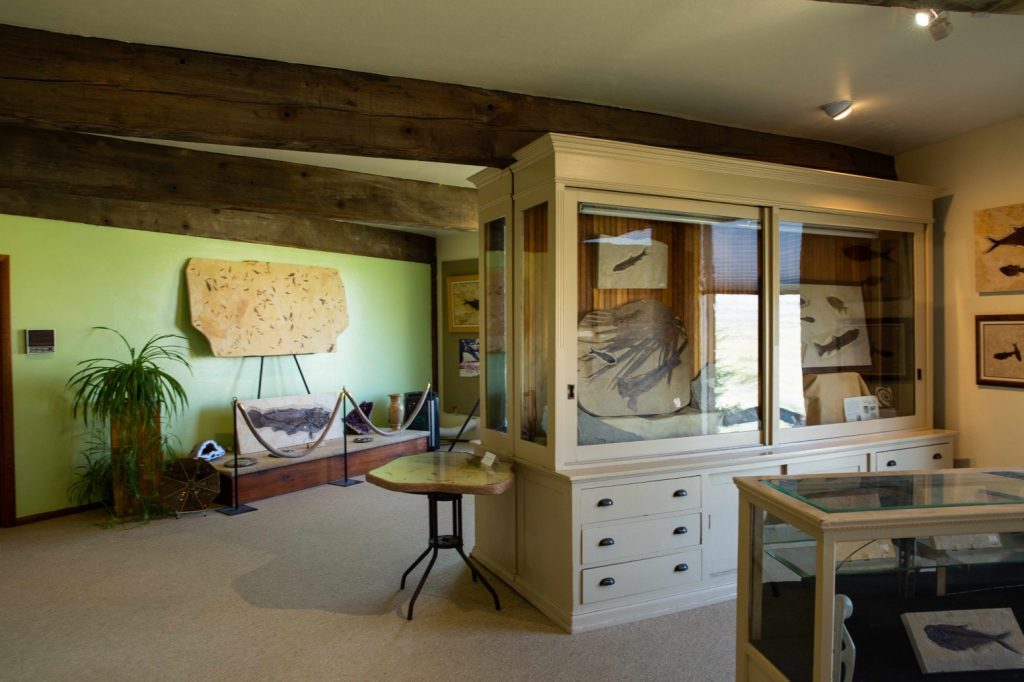 Underneath the gallery is the preparatory area where they’ve spent thousands of hours meticulously preparing and preserving the natural beauty of the fossils. Snively continues the Ulrich tradition of hand-excavating and hand-preparing their finest fossils. “I just love to look for things, discover things, no matter what it is,” Snively said. “And you meet a lot of cool people along the way.” 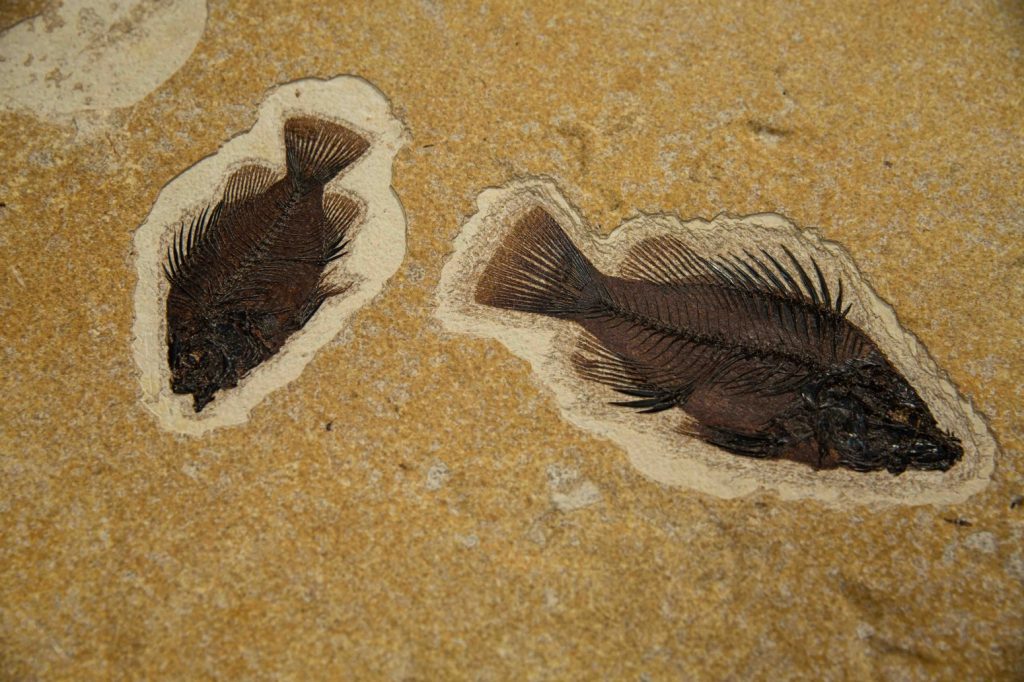